Finally found some time for another blog.. The past three days were crazy… The day before yesterday (June 16th) I was welcomed to an early morning briefing with this message: “Cédric, you’re going to Belo Horizonte tonight.” Alrighty then! So I’m going to see that game as well! I will have seen all the Belgian group stage games! Awesome!

After that? Pure chaos.

That evening we were supposed to leave for Belo Horizonte to go and pick up around 200 Belgian supporters in the local airport, get them to the stadium in buses, watch the game and get back to Rio in the same buses afterwards. A briefing at 5pm would give us some more information, but that briefing never took place..

A little after 6pm, the five of us (Anne, Didier, Gilles, Laurens and me) were pushed into a cab to the Copacabana. There we would take a bus and then we would see.. In the meantime, we had bought some pizza’s as dinner wasn’t arranged. When we got to the buses there were around seven guides there who were also coming but apparently didn’t know we were joining them. Anyway, it got arranged, except for Anne and Gilles who didn’t bring their travel passports but only a copy of it. So they had to go back to the camping lot to go get the original one and then take another bus to Belo.

Didier, Laurens and I could go on the seven hour bus trip. It brought us to the airport, but still nobody really knew what was supposed to be done. It was only at the airport that we finally got to start planning some things. The plane would land around 4.30am, but leaving the airport couldn’t happen before 9.30am as the local ticketing office wouldn’t open until 9am and a lot of the Belgian supporters still had to pick up their tickets with the vouchers they had.

When we finally got to go to the stadium, we were missing 18 people who apparently didn’t show up. Did they cancel their flight? Did they jump in a cab without telling anyone? We had no idea..

At the stadium, again, a lot of chaos. We would first go to a meeting point and meet someone of the Royal Belgian Football Association there who would give us (as in: the 5 DeVillage-volunteers) our tickets. Only problem: the meeting point had gotten cancelled by the local police. So there was no meeting point and we had to go back to the stadium. Not the three of us though (we still hadn’t found Anne and Gilles) because we didn’t have our tickets.

So that’s where the frustration started building. The group of Belgian supporters that we were supposed to accompany with the guides could move on, while we were stopped. Luckily, the military police were understanding (after like fifteen minutes) and guided us to the stadium where we could restart our search for the RBFA-people who had our tickets.

Long story short, we never found them, we weren’t able to reach them by phone or text and we got so sick of it that we just bought some Algerian guy’s tickets at one of the entrances. It cost us 300 reais (100€) per ticket and thus we could finally enter the Estadio Mineirão about thirty-five minutes into the game. Apparently the Red Devils had waited for us because they only started playing better when Driens Mertens and Marrouane Fellaini were brought on the pitch as substitutes. A one goal deficit was turned around into a 2-1 victory! Yet we still don’t understand why Kevin De Bruyne was named ‘Man of the Match’.

Anyway, in the end we did see (part of) the first Belgian group stage match. It was nice to see the way supporters united after the game. As we waited for our buses, we would applaud the Algerian supporters while fans from all over the world would join us in the celebrations.

After a 7-8 hour bus ride to Rio, we arrived at the DeVillage around 1.30am and had to stay up another 1,5 hours to check-in everyone, guide them to their tents and offering them something to eat and drink. After all of this was finished, I got to go to sleep and was sure about one thing: I would NOT go to Belgium vs. Russia at Maracaná in the same way. I really want to be able to enjoy that game, as a normal supporter, not as some sort of guide-without-a-clue.

Sarcastically “nice” of the Belgian press to be there filming when the Belgian supporters arrived at DeVillage, by the way. The fans had had a long flight, an equally tiring bus ride, a football match (with a lot of beer of course) and a day full of lack of communication, while they had already heard stories in the Belgian press about the camping being far from perfect. So obviously, at 1.30am after another long bus ride, the Belgian press would get some more negative reactions on tape. What else did they expect? So I suppose the newspapers will again be full of negative articles and reports tomorrow…

A negative atmosphere that was still there today. I have lost count on the number of times that people complained to us about the wifi, about the toilets, about the communication, and so on. Always the same complaints, but at the same time everybody understand that we can’t do anything about it. They do respect the volunteers and that is much appreciated. “You guys can’t do anything about this situation, but you do are the ones that get all the complaints” is something we also heard a lot.

Tomorrow morning (June 19th), the organization will communicate some information to the guests about the how’s and why’s of the current situation.

Right now I am not expecting a lot of complaints though. As I am typing this, the guests are partying in the party area. They have watched football/soccer on the big screen there, there was a very nice barbecue in the evening en after that Belgian dance formation SX gave a nice little concert. Right now, DJ Dave Lambert is keeping the party going.

I’m sure this evening has taken a way a lot of frustrations. If the communication/info session of tomorrow morning goes equally well, everything will be ok.

Also the RBFA-delegation that visited us today seemed very understanding. The tickets we bought yesterday from that Algerian guy because we never got ours will be refunded and our remarks on the lack of communication were welcomed as well. There’s even a chance that a part of my phone bill will be refunded..

Anyway, as far as I’m concerned, I’m still ok. Yesterday evening I was very happy to be able to go to sleep after a hectic 24 hourse and when I woke up this morning I wasn’t really in a good mood. But all in all… After ten days here in Brasil, this was the first “bad” day, so that’s pretty damn ok. Better than I had feared before leaving Belgium. I’m happy with the way I’m handling all of this and the days are still going by very fast. But I do will be happy to be in my own bed again when I’m back in Belgium and I do look forward to having some Belgian frites again. And a hot shower…

More about the group SX: 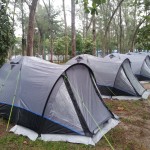 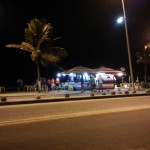 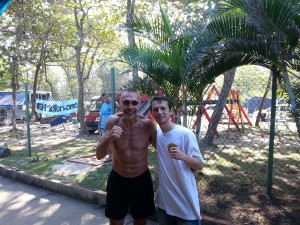 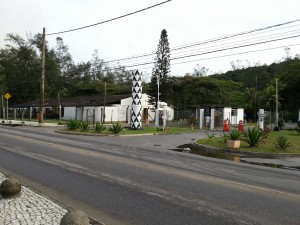