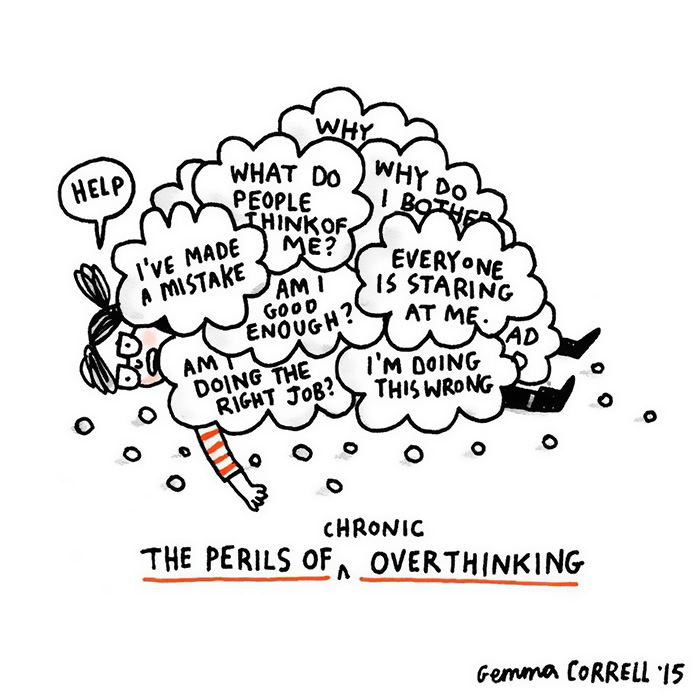 The blog below was written by Kirsten Corley on Thought Catalog some days ago. To me, it was a great and very recognizable read. I know exactly what Kirsten is talking about as I’ve been going through it for such a long time. The feelings of overthinking, thinking you’re not good enough for anything or anyone, underestimating yourself. It’s all a part of my life and it causes mood swings which are just so annoying. The slightest thing can make me feel sad or upset because of some sort of anxiety. Kirsten perfectly describes what is like (for her?) by giving numerous examples of things/thoughts people with anxiety go through. What I highlighted in the text is what I personally related to the most.

« WHAT ANXIETY ACTUALLY IS, BECAUSE IT’S MORE THAN ‘JUST WORRYING’ »

Anxiety is the restless nights of sleep, as you toss and turn. It’s your brain never being able to shut off. It’s the thoughts you over-think before bedtime and all of your worst fears become a reality in dreams and nightmares.

It’s waking up tired even though your day just started.

Anxiety is learning how to function with sleep deprivation because it took you until 2 am to shut your eyes.

It’s every text you wonder ‘how do I word this properly?’ It’s a double or triple text in case you messed up. Anxiety is answering texts embarrassingly fast.

Anxiety is the time you spend waiting for an answer as a scenario plays out in your mind of what they could be thinking or are they mad?

Anxiety is an unanswered text that kills you inside.
even though you tell yourself, ‘maybe they’re busy or will answer later.’

Anxiety is that critical voice that says ‘maybe they’re deliberately ignoring you.’ It’s believing every negative scenario you can come up with.

Anxiety is waiting. It always feels like you’re waiting.

It’s the inaccurate conclusions drawn as your mind takes off and you have no choice but to follow it’s destructive lead.

Anxiety is apologizing for things that don’t even require the words, ‘I’m sorry.’

Anxiety is self-doubt and a lack of confidence both in you, yourself and those around you.

Anxiety is being hyper aware of everyone and everything. So much so, you can tell if there’s a shift in someone merely by their tone or word choice.

Anxiety is ruining relationships before they even begin. It tells you, ‘you’re wrong, they don’t like you, they’re going to leave.’ Then you jump to conclusions and ruin it.

Anxiety is a constant state of worrying and panicking and being on the edge. It’s irrational fears.

It’s thinking too much, it’s caring too much. Because the root of people with anxiety is caring.

It’s sweaty palms and a racing heart. But on the outside, no one can see it. You appear calm and at ease and smiling but underneath is anything but that.

Anxiety is the art of deception for people who don’t know you. And for the people who do, it’s a constant stream of phrases like, ‘don’t worry’ or ‘you’re overthinking this’ or ‘relax.’ It’s friends listening to these conclusions you’ve drawn and not really understanding how you got there. But they’re there trying to support you, as things go from bad to worse in your mind.

Anxiety is wanting to fix something that isn’t even a problem.

It’s the stream of questions that make you doubt yourself.
‘Did I lock the door before I left?’ ‘
‘Did I turn off the stove?’
‘Is the straightener still on?’
It’s turning back around just to double check.

Anxiety is the uneasiness at a party because you think all eyes are on you and no one wants you there. Anxiety is that extra shot you take and it seems like you’re finally relaxing. Until you wake up the next day hungover, full of regret and wondering what you said to who and do you owe them an apology?

Anxiety is the overcompensating and trying too hard to please people.

Anxiety is being everywhere on time because the thought of being late would put you over the edge.

Anxiety is the fear of failure and striving for perfection. Then beating yourself up when you fall short.

It’s always needing a schedule or a plan.

Anxiety is that voice inside your head that’s saying ‘you’ll fail.’

It’s trying to exceed people’s expectations even if you’re killing yourself to do so. Anxiety is taking on more than you can handle just so you are distracted and not overthinking something.

Anxiety is procrastination because you’re paralyzed with fear of failing so you hold it off.

It’s the triggers that set you off.

It’s breaking down in private and crying when you’re overwhelmed but no one will ever see that side of you. Anxiety is picking up and trying again because the only thing worse than overcoming other people is overcoming you and your own demons.

It’s beating that critical voice that says, ‘you really fucked up.’ or ‘you should feel awful right now.’

Anxiety is the want and the need to control things because it feels like this thing in your life is outside of your control and you have to learn to live with it.

And when you come across friends who begin to understand, they help you through it. Then you realize this might be a battle you face every day but it’s one you won’t have to face alone.

Header picture is a comic on anxiety drawn by Gemma Correll.

The Secret to Remembering Travel

Posted On : 21 March 2015
Previous post Why a million miles of travel gives me hope for the future
Next post 10 things you must do when in Rio