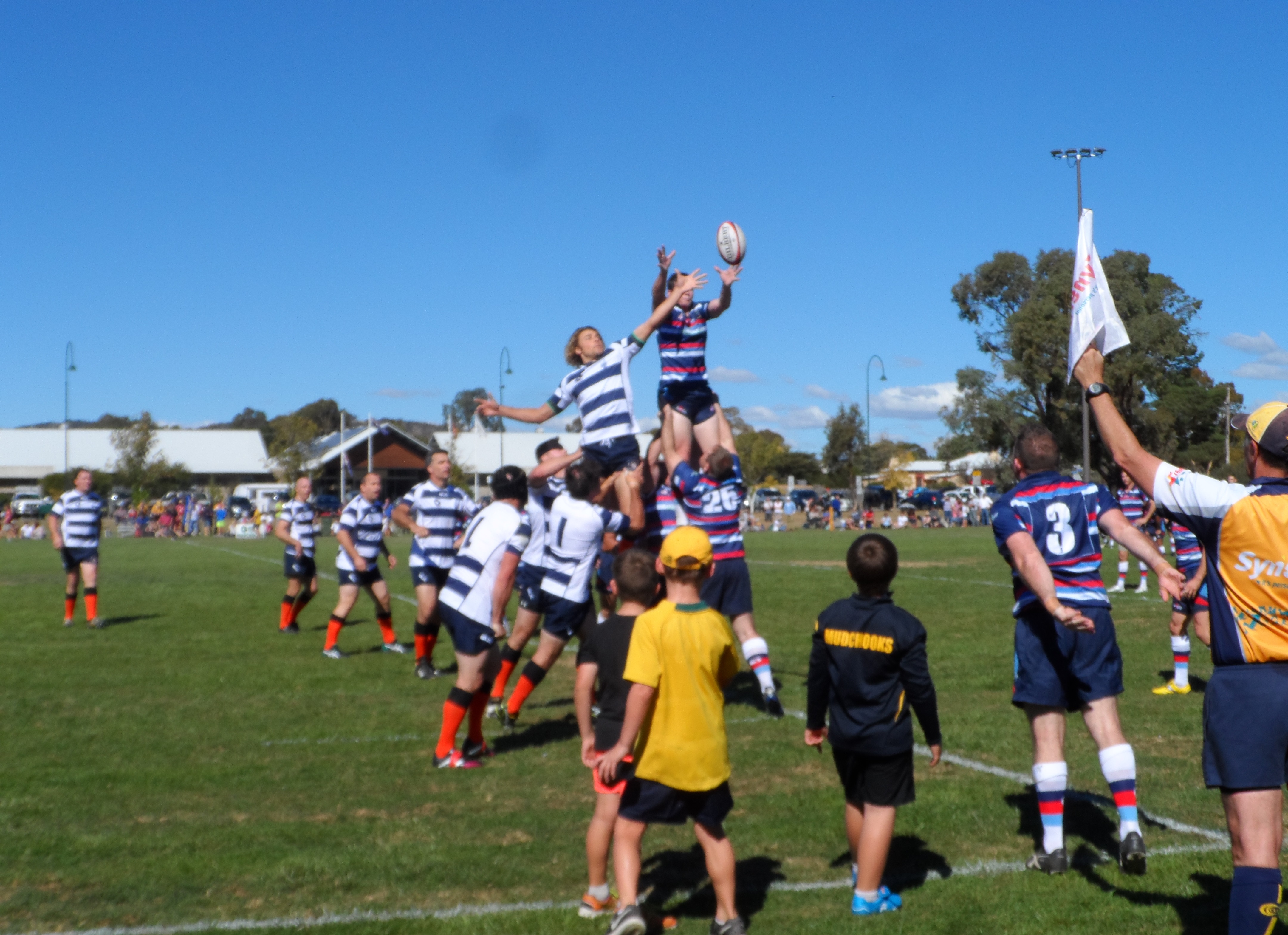 Today was my 20th day at Gidleigh Station already. Tempus fugit. The past couple of weeks, we’ve been very busy working in and around the homestead. Two of the many rooms in it had been renovated, while the swimming pool in the garden had been removed to make space for an ‘entertainment area’ with a large fireplace, flanked by a pizza oven on its left hand side and a barbecue with six (!) grills on the other side.

All of this had to be completely ready by last Friday, which meant that until then I have often been cleaning, splitting wood for the fireplaces, moving furniture, and so on. The fact that it had to be done by Friday, was because around seventy people were expected to come to Bungendore to stay at either the Lake George Hotel or the homestead. Both owned by the same family, the one of Richard Harry, former player of the Australian national rugby team nicknamed “the Wallabies”.

All these people would come to Bungy to play a fundraising game on Saturday. A game between the ‘Silver Foxes’ and the ‘Salty Blue Leopards’. The first ones are a selection of former Wallabies (Richard Harry, Owen Finegan, …) and some locals such as Brad, the manager of Gidleigh Station, as well as for example two of Richard’s sons. The ‘Salty Blue Leopards’ on the other hand are a selection of rugby players who are part of the Australian Defence Force. While the ‘Foxes’ would raise funds for the ‘Black Dog Institute‘, the ‘Leopards’ were doing so for ‘Mates4Mates‘.

And thus, I saw my very first game of “footy” last weekend. A nice and quite intense game of rugby, won by the Leopards…

On the next day then, it was time for the final of the Cricket World Cup. Not here of course but at the Melbourne Cricket Ground where 93,030 people watched the game. I was watching it from our living room here at Gidleigh and reckoned the Aussies beat New Zealand a lot easier than expected. By the way, I have to admit that cricket isn’t nearly as boring as I thought it was before I came to Straya. Once you understand the basics of the game, it actually is quite entertaining. For example, the semi-final between New Zealand and South Africa was definitely worth watching!

About one and a half weeks ago, on Sunday, Brad had taken me to a cricket game he was playing in himself. A game between two pubs basically… Bungendore’s “Royal Hotel” has a team where Brad is part of and they took on another pub from Queanbeyan. One half of the game before the barbecue lunch and one half of it afterwards. All of this with a couple of beers of course..

Today then, it was time for me to finally get active in sports as well! Apparently, fellow backpacker at Gidleigh Jacopo is playing some recreational soccer every Thursday on a field here in Bungendore, together with some locals and some people who work at the Lake George Hotel. If I wanted to join in? Hell yeah! Six people showed up today: Gemma, Naomi, Niki, Darren, Jacopo and myself. It was so great to play some soccer again, for the first time in nearly six months.. I have missed this, badly. We played a little three versus three game in which I scored both the first and the final goal in a fairly easy 6-1 victory. Not a bad debut, I reckon!

Less easy was this other “sport” I practised yesterday and today. Well, it wasn’t actually a sport, I am mainly referring to the tool I have been using: a dirt bike. Whereas mustering cattle had always happened with a ute or a quad bike up to now, I had to get on a dirt bike yesterday and today. My first time on a motorcycle and I have to admit I am not comfortable with it yet. Especially not when going through some tall grass or a paddock full of rocks. I’m not used to switching gears on that dirt bike either, yet. It will take me a couple of more hours to fully get used to this..

Anyway, it is all still a lot of fun. When I said ‘yes’ to this job at Gidleigh Station, I definitely wasn’t expecting to meet some footy legends, to get a taste of cricket, to drive around on a quad bike or a dirt bike or even to be able to play soccer on a weekly basis. I am still learning new stuff here every day and at the same time there is room for sports.. It makes life so much better!

Next to all this, I don’t really have anything “new” to tell though. In my next blog, that will be different. If everything goes as planned, next Sunday or Monday you will be able to read about yet another new experience I will have gone through.. Not sport related though, something totally different… I definitely am curious about it already!