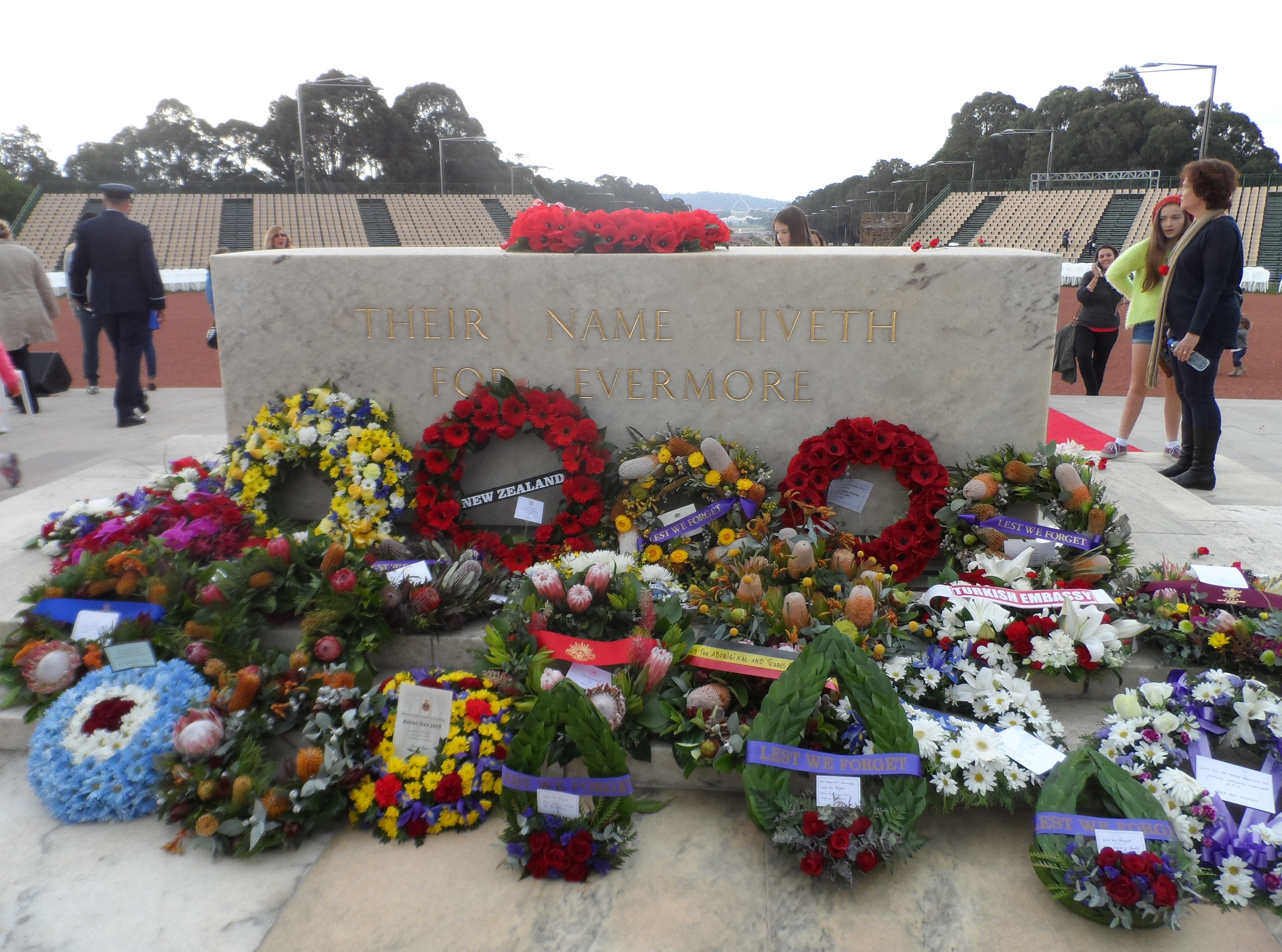 When coming to Australia, I really hadn’t planned that much. Of course I had done a little bit of research, but not much either. In the end, it also wouldn’t have been useful as plans always change when you’re travelling because of new insights, opportunities that arise, things you discover, the people you meet and their stories, and so on. Yet, there were two things I was sure of: (1) I would spend my first week in Sydney and (2) if I would still be in Australia by the end of April, I would spend ANZAC Day in Canberra. And so it happened.

ANZAC Day is similar to Remembrance Day (Armistice), but not the same of course. It’s on the 25th of April (yearly), the day that Australians and New Zealanders fought their first big battle of the first World War at/near Gallipoli, Turkey, in 1915. So exactly 100 years ago, which made this edition of ANZAC Day extra special. In the last couple of years around 35 000 people attended these ceremonies, the Australian War Memorial was expecting 70 000 for this edition, they told me one day before.

Three major ceremonies were scheduled on this day. A dawn service at 5.30am (with some readings starting an hour earlier), the National Ceremony at 10.15am and the Last Post ceremony at 4.45pm to round things off. It meant getting up early, especially for this centenary edition. My alarm woke me at 3am and I left half an hour later, on foot to the Australian War Memorial. Arriving there a little before 4am turned out to have been a good idea because there were still some spots left in the stands and as I took one, I was guaranteed a good view on this early morning service. When that service took place two and a half hours later, a whopping 120 000 people had come to the Memorial and Anzac Parade to attend it, that being 50 000 more than what the AWM had expected..

During last week, pictures were projected on the front of the War Memorial at night. Pictures from the wars and battlefields that had involved Anzac’s, such as Gallipoli of course, but also for me very familiar locations such as Ypres, Passchendaele, Messines, Poelcapelle, et cetera.

Starting 4.45am, some testimonies and diary entries from/about Anzac’s from different wars were read until quarter past five. At 5.30am the ‘Dawn Service’ started. This early to commemorate the fact that the Anzacs had started their battle at Gallipoli (100 years ago) this early as well. Sitting on the stands, I had no idea of the large number of people that had shown up and were standing on Anzac Parade behind me enduring the cold morning (around 5°C). It’s only afterwards that I saw the pictures of how packed this beautiful location had been. The service was very nice, including prayers, the laying of wreaths, some hymns (‘O Valiant Hearts’, ‘Abide with me’), John McCrae’s poem ‘In Flanders Fields’, the Last Post and the Australian National Anthem of course. A little after 6am, the sun started to rise and this was nothing other than a very beautiful moment for such a meaningful ceremony.

After the Dawn Service I went back to my hostel to enjoy a hot chocolate. Believe me, I could use it after over three hours in the cold. Around 7.30am I walked back to the War Memorial. The National Ceremony was scheduled to start at 10.15am but this time the stands and seats were reserved for people with either an invite or a ticket, neither of those being my case. I didn’t feel like standing somewhere in the crowds having to look at one of the large screens around the memorial, so that’s why I got there by 8am already: to find myself a spot as close as possible to the reserved area. Mission accomplished! I got to stand in front of the memorial right behind the barriers marking the borders of the reserved spots. So for this ceremony as well, I had a good view.

This National Ceremony lasted until 12.30pm and the majority of this had been a parade of almost 100 different army-related groups: veterans of different wars (or their family members), marching bands, the military police, the RSL, navy, air force, and so on. Amongst the VIP’s attending the ceremony I only recognized ‘mister Wimbledon’: Prince Edward, the Duke of Kent. Other VIP’s were lots of ambassadors, governors, et cetera. The Defence Force Academy took part in this ceremony as well, which meant I saw a familiar face again. I was proud that Aimee could be part of this and so was she of course. Must be an honour to be part of this ANZAC Day commemoration.

It was beautiful to see how all these national heroes of both the past and the present were honoured and paid tribute to. The amount of respect was enormous. It was also a bit surreal for me to see how the enemy of a century ago (Turkey) was part of this commemoration. ANZAC Day isn’t just about the Anzac’s, it’s also about the Turkish soldiers. I really can’t imagine such thing in Western-Europa would German armymen and -women take part or parade in a ceremony like this. Turkey and Australia have become friends since Atatürk’s reign over Turkey and that is remarkable. A sort of forgiveness in a way I have barely experienced before.. I’m impressed.

After the National Ceremony (broadcast live on tv, just like the Dawn Service), it was lunchtime. Around 3.15pm I went back to the Australian War Memorial, for the third time today. This time for the ‘Last Post Ceremony’. This takes place every day at the AWM, just like the one under the Menin Gate in Ypres, but here it’s at 5pm and not at 8pm like in my hometown. What is really nice is the fact that every Last Post ceremony at Canberra’s War Memorial also tells the story of one of the many Australians that lost their lives in one of the two World Wars. Today there would be two stories though. Just for this special occasion, the story of former Turkish president Mustafa Kemal Atatürk would also be told. Representatives of Australia, New Zealand and Turkey attended the ceremony and the national anthems of all three countries were played.

This entire day has been extraordinary for me. The unity between the Anzacs is amazing, but the bond with their former enemy Turkey is just as great to see. I am honoured, proud and happy to have been here on this special occasion, to have had a good view on every ceremony and to have been one of the 120 000. It was a privilege that made me realise more than ever that the World Wars actually were WORLD wars. Tomorrow or the day after, I will finally actually visit the Australian War Memorials museum and learn a bit more on Australian history. 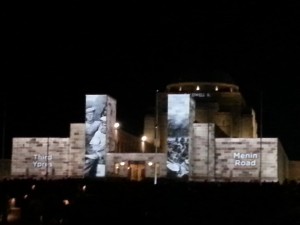 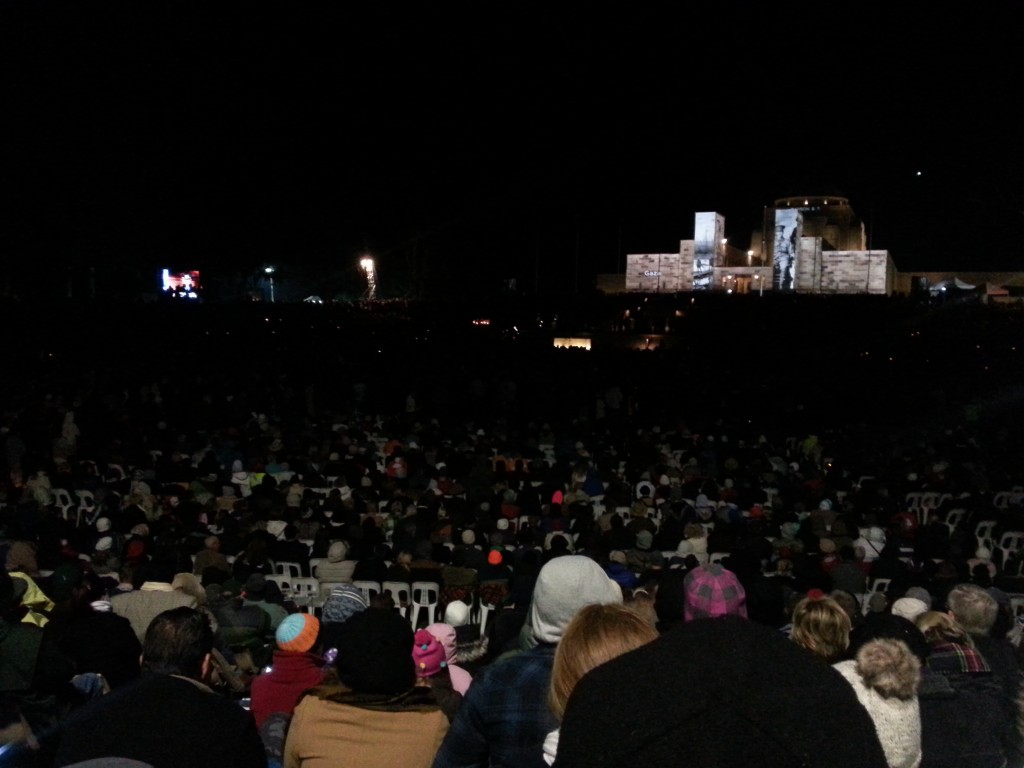 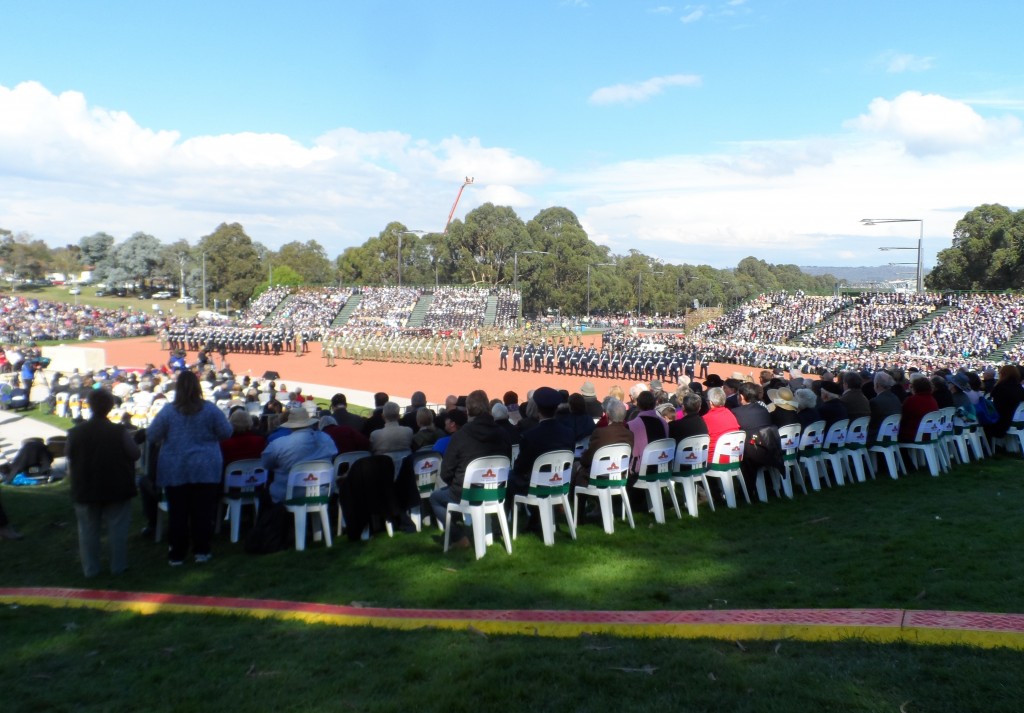 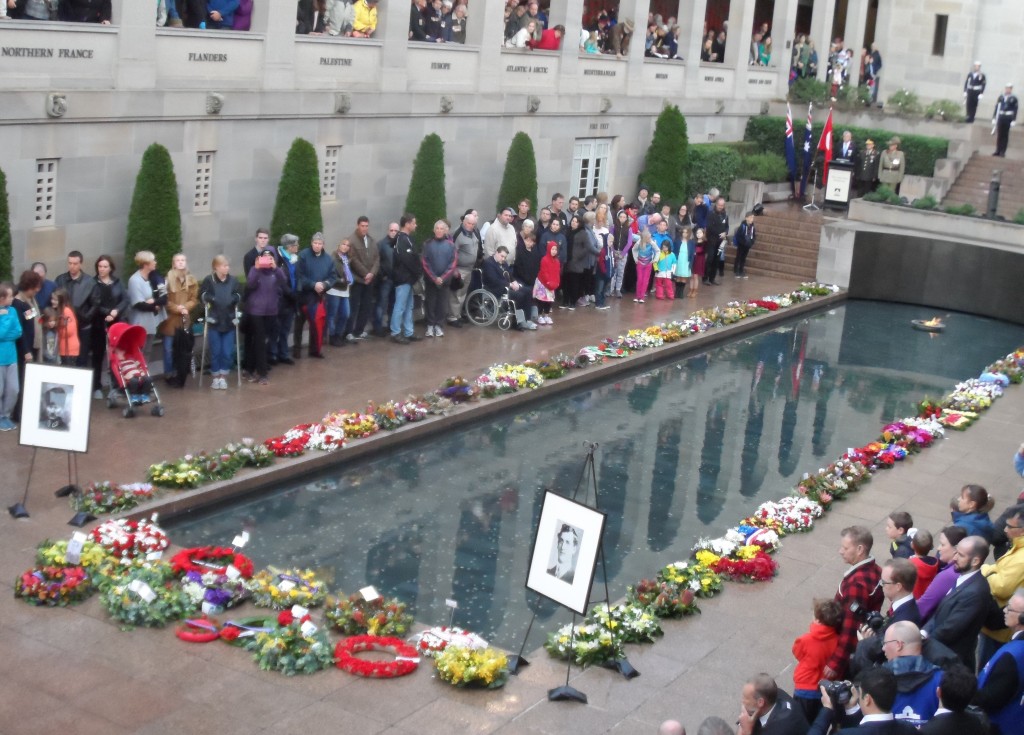 The pictures above are my own and of not that good quality. So feel free to also check the official pictures taken by the AWM’s photographers and posted on the Flickr-account of the Australian War Memorial: