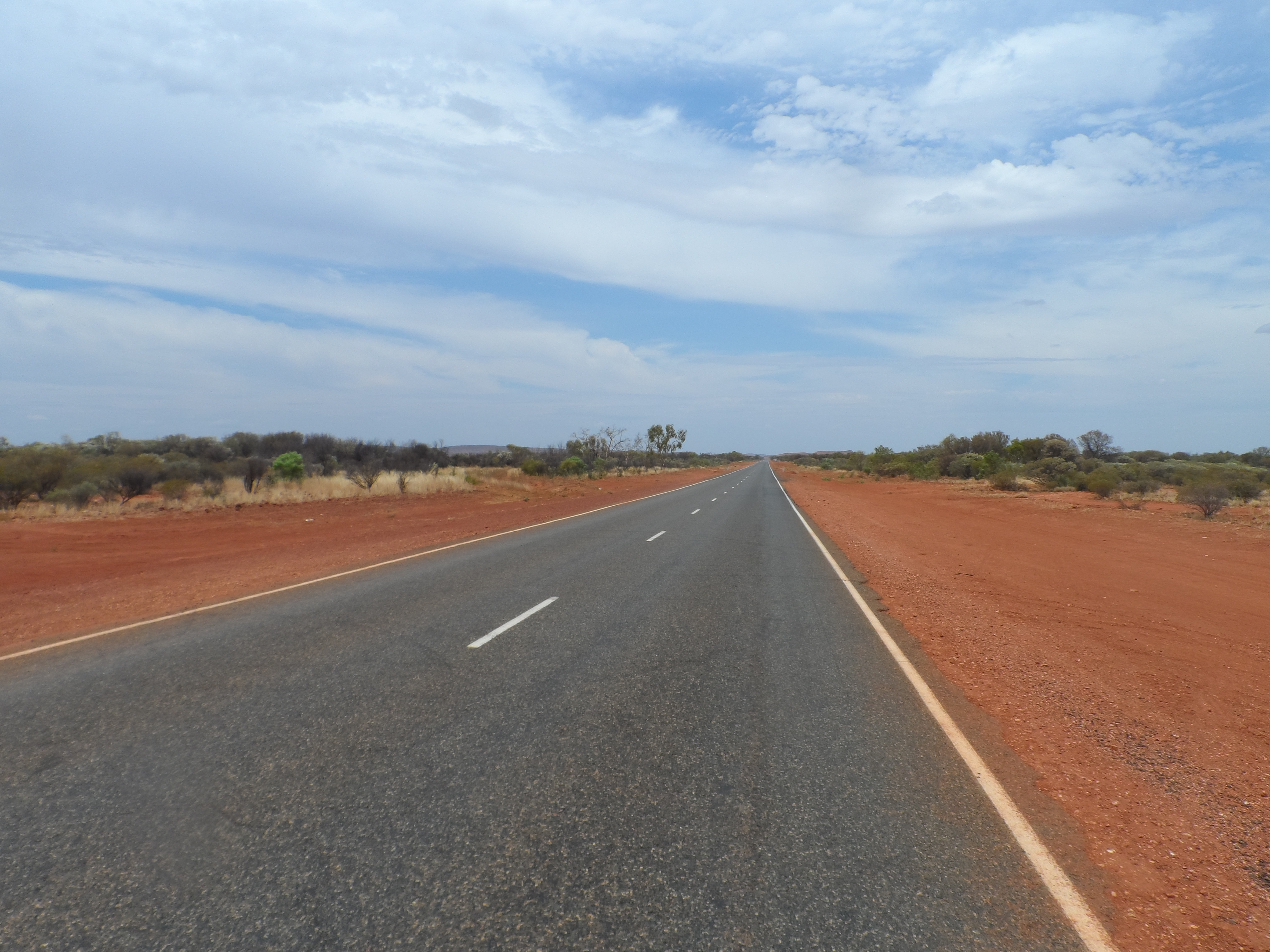 As you could read in the previous blog, I departed on a journey through Oz’s Northern Territory and Outback on Monday 17 November. We’re on the ninth day of that trip now and I’m starting this difficult task of writing something about it. Where to start? How to pick just one picture for the header? How can I possible summarise all the beauty I’ve seen? How can I make sure you all understand that I’m enjoying this? I’ll just start writing and we’ll see how it goes, but I have to warn you though: this text might get pretty long…

So, it’s the ninth day of this journey and I’m at the Ayers Rock Resort, close to – you won’t be surprised – Ayers Rock, the magician also known as ‘Uluru’. Our guide is nicknamed Squatter and he’s accompanied by Scott who will be a guide on this tour later on. Our group consists of these twelve people: Aimee (Aussie), Daniella (Swiss), Emmanuelle (French), Meghan (Canadian), Nay (Cambodian), Saskia (Dutch), Yurina (Japanese), Dean (British), Florent (French), Jae (Korean) and Jason (Aussie).

Daniella fluently speaks five or six languages (if not more), Yurina and Dean are engaged, Saskia is always brilliantly enthousiastic about every new experience, Jae looks a hell of a lot like ‘Kimball Cho’ from ‘The Mentalist‘, but I’ll just make it clear for everyone: I’m a huge fan of Aimee, have quite the crush on her (no worries, I’ll get over it some day) and that’s why she’ll play an important part in this blog as well. Look, when a woman is studying at the Air Force, aiming to become a ‘flight test engineer’, while also playing football (to the Aussies and Americans: I mean soccer), has been to space camp at NASA, seems to have a good taste in music and a possesses a brilliant (sarcastic) sense of humour, then I will find her fascinating and awesome in so many ways that I could definitely fall for her. A first possible explanation for the title of this blog (even though she’s not the ‘princess’ type of girl), but I can assure you that the actual explanation of the title will be more hilarious. Mark my words!

Anyway, back to this trip. I’ll post a day by day list of everything we’ve done below this blog. To summarise, we did a lot of different ways of transport: walking, hiking, swimming, driving, riding and even flying. All of this in a context of culture, history and damn beautiful nature. Let me give you some highlights…

On day one, we drove to Litchfield National Park, kind of Kakadu’s little brother. A day of swimming underneath waterfalls. We saw four waterfalls in total and swam at the bottom of three of them. We spent the night at a motel and that was a very pleasant surprise. A decent bed, tv, wifi, a bathroom. So extremely awesome after having spent the previous weeks in hostels! You have no idea how much I had missed that!

The second day was the first one of two days in Kakadu National Park. In short words: one of the most beautiful things I’ve ever seen. Such a beautiful park… The highlights of this day were the hike to Ubirr Rock and the cruise on the East Alligator River. The 360° view on top of the first one still gives me chills. The latter was just as great because of the presence of crocodiles and because the river is also a natural border between Kakadu and the aboriginal region of Arnhem Land. Setting foot on Arnhem Land is a big deal here when you’re not an indigenous Aussie, so being able to (briefly) do that and getting information from the guide on their ways of hunting makes the cruise absolutely worth it.

On our second day in Kakadu, we went to Nourlangie Rock. Less spectacular than Ubirr rock, but with much better and more beautiful aboriginal art. Also here: definitely worth doing. After that, we went on to Katherine, while stopping at a few billabongs and Pine Creek. In Katherine, we’d spend the evening ‘lawn bowling’ in the local club, a sport that’s apparently getting more and more popular amongst Aussie youngsters. Squatter divided us in smaller groups, gave us a quick initiation and then we started bowling, had dinner and bowled some more. Squatter let me play against Aimee and Meghan before dinner while Aimee and I continued our own little championship afterwards. Me winning game after game against our Air Force Aussie earned me the nickname ‘princess’, because – according to Aimee – it takes a lot of finesse to lawn bowl.. I thought this was hilarious and started looking for a nickname for her as well, but still haven’t found one (help!). Though reminding her every now and then of the fact that I beat her 6-1 will probably do for now. Anyway, I had a good laugh that evening!

We stayed in Katherine on the fourth day to go and visit Nitmiluk National Park. In the morning, we went canoeing on Katherine river towards the Katherine gorges. A total of 6,4 kilometers. And yes, there were two people in every canoe, but no, I was not in the same one as Aimee. Frenchie Florent was my wingman for this and apparently he’s just as competitive as I am, judging by the fact that we kept on canoeing in front of the others. Or maybe that’s just because I kept on paddling while he was taking pictures and filming with his GoPro. We ended up at the first or the second gorge (I don’t remember) where we went swimming and jumped of a rock. Those who know me know that I’m afraid of heights, so this wasn’t easy for me even if it was only three or four meters high and I don’t really have an excuse after the bungee jump I did in 2012. Aimee took all the stress away though, with her characterising sense of humour. “Come on, Belgium! I promise I will stop calling you ‘princess’ if you jump, so there’s your motivation!”

In the afternoon there was some more walking and swimming, this time at Edith Falls (Leliyn). Katherine river, Edith falls, I’m guessing this location/region has had its fair share of important women throughout history. Anyway, quite nice again to be able to swim under waterfalls and rest on the rocks beneath them. (Rest, Squatter and Aimee, not passing out or sleeping!)

On to day five: from Katherine to Tennant Creek. The first of two days with a lot of kilometres of driving. Highlight here was the lunchstop at Daly Waters pub. A pub in Daly Waters which is full of stuff left there by tourists: bra’s, thongs/flip-flops, hats, you name it. Pretty impressive to see! Further, we also stopped at Tennant Creeks telegraph station where one anecdote caught my eye. “In 1908, Frances Birtles cycled from Sydney up the east coast, across to Darwin and then down through the centre of Australia.” Eat your heart out, Tour de France! I don’t see anyone doing this today, especially not in the temperatures of the past week. 40°C and more were no exception. I’ve been told that this night in Tennant Creek didn’t even get colder than 25°C.

On day six the plan was to get from Tennant Creek to Alice Springs. Our first stop in the morning were the Devils Marbles (Karlu Karlu), a perfect location for some funny pictures. After having stopped for some pictures of rusty cars at Wauchope and the wannabe-Roswell of Oz, Wycliff Well, we arrived in Alice and went to see the ANZAC Hill Memorial and were driven around the city in light of the free day we would have in Alice the day after.

Aimee, Saskia and I decided to visit the Alice Springs Reptile Centre on that free day, as well as the Royal Flying Doctors Service centre. Both were worth it. In the first one, I ended up with a snake in my neck (don’t remember which kind of snake though) and in the latter one you could only get huge amounts of respect for the job that the RFDS does every single day. Resting was the plan for the rest of the day… At dinner we met ‘Shorty’ for the first time, who had travelled with another group from Melbourne to Alice to join us here in the centre for four days around Alice and Uluru. After that, Squatter and Scott will drive the others back from Alice to Darwin, while I (and Florent, Jason, Jae and some others) will join Shorty to go on to Melbourne. Some people will end their trip when we’re back in Alice in a couple of days because they have to get back to their jobs or studies or move on to travel the east coast.

Day eight then. Yesterday. On to Ayers Rock (Uluru)! A must when you’re down under, obviously. It’s pretty impressive to see that giant rock in the middle of nowhere and Squatters aboriginal playlist in the bus made that sight a little more magic even. We drove around it and went to one of the lookouts in the evening to watch the sunset. A cup of champagne, a nice group of people, some appetizers, the sunset. Truly amazing, let’s be honest.

So today we’re on day nine of this Outback expedition. Almost halfway, although some others are closer to the end of their trip. We said goodbye to Yurina and Dean on Saturday (day 6) and I’ll unfortunately have to say goodbye to my Air Force bully Aimee and Daniella, Emmanuelle, Meghan, Nay, Saskia, Scott en Squatter the day after tomorrow as for them this journey ends when we get back to Alice.

This morning we headed back to Ayers Rock very early. We left the resort around 4.15 am to watch the sunrise first and to start the Ayers Rock base walk around 7 am. A really nice walk of around 9,4 kilometers. Just don’t do it on a later time of day because it gets too hot then.

This afternoon we had some free time, although there were some optional extra activities we could do, apart from lying next to the pool. Learn some aboriginal dances, do a scenic helicopter flight above Uluru (and Kata Tjuta), drive around Uluru on a Harley-Davidson, an evening ‘Astro Tour’, that kind of stuff. I went for the helicopter flight in the afternoon and will go star gazing in the evening. I’d do the first with Aimee and Jae, but Jae eventually decided not to do it. For the ‘Astro Tour’ I will be joined by Aimee, Dani and two people from the other group.

I don’t know what the ‘Astro Tour’ will be like yet, but I can say that the scenic helicopter flight was more than worth it. An amazing and breathtaking thing to do, once again. We flew around Uluru and Kata Tjuta (where we’ll be tomorrow) for half an hour, which was way too short.. The sights were breathtaking and Air Force Aimee’s happiness and excitement before, during and after the flight was one of the most beautiful things I’ve seen on this trip. It might have been quite expensive (275 aud), but I enjoyed every second of the flight. A unique experience that I definitely want to do again some day. Later tonight, Daniella will cook for us and after that I’ll go watching some stars! Great day, once again!

(I’ll add some useful links later on, I promise!) 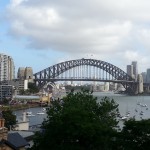 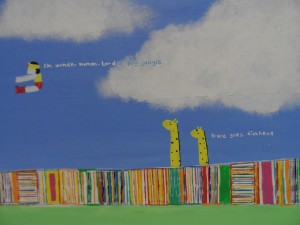 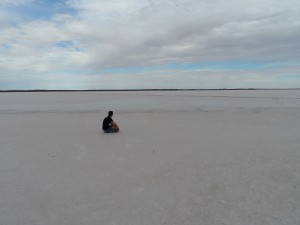