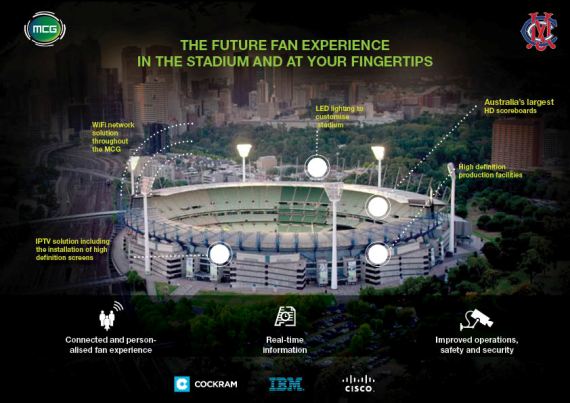 Having a capacity of 100 024 seats, Melbourne Cricket Ground (MCG) is by far the biggest sports stadium in Australia and the Southern Hemisphere. It’s the second largest multi-use stadium in the world and – if you don’t take racetracks into account – the eighteenth largest sports stadium in the world. (Source: WorldStadiums) The stadium has housed the 1956 Olympic Summer Games, the 2006 Commonwealth Games, the Cricket World Cup in 1992 and right now, and so on. It isn’t only used for cricket matches but also for Aussie Rules Football, rugby, athletics, association football, rock concerts, even a visit of the Pope in 1986. ‘The G’ is owned by the state of Victoria, but managed by Melbourne Cricket Club (MCC), widely regarded as the oldest sports club in Australia. In 2015 the MCC is investing over thirty million dollars in “the spiritual home of Aussie sports”, all of it with the purpose of bringing fans even closer to the action.

The plans for these changes were unveiled early February and would turn the MCG into one of Australia’s technically most advanced stadiums, with the best possible facilities to engage fans, members and stakeholders more. In total, around 45 million Australian dollars (+/- 30,6 million €) will be invested in:

The new WiFi network will be fast and secure for every visitor to the stadium accessing it on any device to get the latest information about the event (s)he’s attending.

The installation of the IPTV system implies the installation of around 800 HD screens on which supporters will be able to follow the action and watch replays for example. These screens being added to the 2000 TV’s that are already in place at ‘the G’.

With these changes, the MCG hopes to become one of the most connected sports venues of the country. A better customer experience and more efficiency through more personalised communication to the visitors are key. Needed, as well, considering the over four million visitors the MCG welcomes on a yearly basis.

The LED lighting system that will be installed on the outside of the stadium will offer the home team the chance of personalising the stadium for their fans. Around 240 LED lamps will give the upper area of the stadium any colour a team wants. Green for the Melbourne Stars, gold and brown for Hawthorn FC, black and white for Collingwood FC, navy blue and white for Carlton FC, it’s all possible.

The same kind of lighting will be provided on other parts of the stadium, including the entrance gates. Even more: signing in Yarra Park will also be digitalised to make it even easier for people to find their way to their team’s game. It will make home games feel a bit more like “home” games.

Ready for the future

Working on all this, Melbourne Cricket Club did its fair share of travelling in visiting other world class stadiums. Dallas stadium, Emirates Stadium, Staples Centre, Nou Camp, Wembley Stadium and others provided inspiration for the planned changes that have to make sure the MCG stays one of the top class sports temples in the world and doesn’t fall back.

The changes will be implemented by renowned companies such as IBM, Cisco and Cockram, who look forward to doing this job of course. They are happy to be able to link their names to this project and use their expertise to transform ‘the G’ into a stadium with even more assets to give visitors and partners a nice experience.

The goal is to give fans some extra reasons the prefer a stadium seat to their sofa back home, but at the same time Melbourne Cricket Club hopes to bring more and bigger events to the stadium. Top of the bill innovations and digital enhancements will offer more commercial possibilities that can make that happen.

All these changes to the stadium will be implemented throughout 2015. All of this while ‘the G’ is already an iconic stadium of high standards. For example: since December 2013, the MCG possesses the two biggest LED screens in Australia, measuring 25,24 by 13,17 meters, covering a surface of 332m² (Source: MCG.org.au). Little comparison for Belgians: the one LED screen in Belgium’s national stadium is only 81 m² ‘big’… (Source: Het Nieuwsblad)

This article was written for and published on Belgian sportsnews website Sportnext.be, who published it on February 16th, 2015.

The article is based on the original that was posted on the official website of Melbourne Cricket Ground. The source of the picture used as header on this page is also that same webpage of the MCG-website. 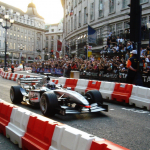 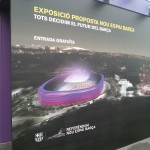